The 1958 Ballad of Narayama is Kinoshita’s unassailable masterpiece. Filmed almost entirely on brilliantly designed soundstages against mattes glazed in gloriously saturated color, this elegy on the transience of life—a lambent work of humanism—is almost unbearably moving. The acts of petty meanness build into scenes of barbaric cruelty, particularly the Amaya episode and the slaughter of Mata (Seiji Miyaguchi) in the final moments.

The film is uncannily beautiful, a moral work of art. It’s a transcendent vision of filial love and one of the greatest allegories in movies of how mortality—the all-too-briefness of life—militates against inhumanity, but only fitfully, which is life’s insuperable tragedy. As Orin, the old woman whose children are all too ready to abandon her to her terrible fate, Kinuyo Tanaka is the apotheosis of the Shakespearean clown: her wizened face framed by a dirty-blonde bob, she’s a miraculous mix of pitiable silliness and heartrending despair. Teiji Takahashi brings understated warmth to his role as Tatsuhei, Orin’s one decent offspring, and the two together give the rare movie impression of actual blood relations between actors. 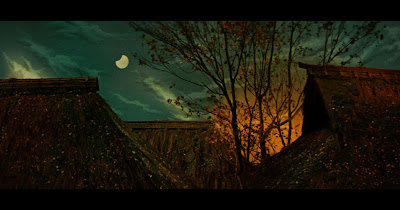 The paradox is plain in Narayama (as it is in its thematic kin, King Lear): because of our bookended lives, if we’re sane, we tell humane stories. This particular story is adapted from a 1956 novella Narayama bushiko (Ballad of Narayama) by Shichiro Fukazawa, and was remade in 1983 by Shohei Imamura in a grittier, naturalistic style.
Posted by David Oberman at 1:54 PM